How a Learning Community is Formed at Tree House Elsternwick

We believe that children are intuitive and skilful researchers. By exploring the world around them, making observations and creating their own hypotheses, children are researching, learning and growing all the time. With the collaboration of educators, children’s research is formed into overarching projects and documented for reflection and discussion at Tree House Elsternwick.

One such example is Tree House Elsternwick’s How a Learning Community is Formed project. While the concept of how a learning community is formed has been around the centre for some time, the launch point for this was through a project the four year old kindergarten program completed in 2016 on Spinners (no, not the fidget kind!).

Through the support of the educators in the way they interacted, the questions they asked and knowing where to watch or join in, a rich learning project was borne which then evolved into a “Super Ninja Battle” game.

But it was more than simply a game.

Cassie Walsh, Educational Leader at Tree House Elsternwick, says, “What was significant about this project was not the content of information such as centrifugal forces, acceleration or trajectory – it was the ultimate discovery that the importance was in the alignment of the children, the way they created rules and boundaries and a set of expectations for participating that resonated throughout the entire year.”

This game is something the children still revisit in their loose parts construction area. The game itself is evolving through the creation of new arenas and new rules such as “black spinners can be good guys or bad guys because batman is black and he is good… sometimes!”

From this, the educators observed that the children were using colours as emotional markers so used this as a launch pad to another project which explored human connection to colours and emotions. There are many directions a project can go and, depending on children’s particular interests, they can take unexpected and exciting turns with the common thread of the previous project.

Cassie notes, “As you walk around Tree House you can still notice the traces of thoughts that extend back to this original project. We call them the A Spin Off to the Spinning Out Project: How the Learning Community is Created.”

The educators in this space are exploring connection to the community through being physically present within the community in our 8-seater pram. By paying attention to what the children were noticing in their community through pointing, verbalisation and gestures, their project “spun off” to be a study on transformation and textures. Cassie comments, “Infancy is ultimately a period of transformation in itself and the texture and colours of autumn are a large part of our indoor and outdoor environment set up.”

The Kangaroo Paw room has far more vocal children and educators are using this developing skill to encourage children to learn more about one another and draw in elements of their own communities. This month they started a ‘show and share’ program where families and children are scheduled to present items or photos that communicate why they are special. Through this, the educators are deliberately placing focus on the role of the listener in the learning community and developing a greater sense of community at the centre. 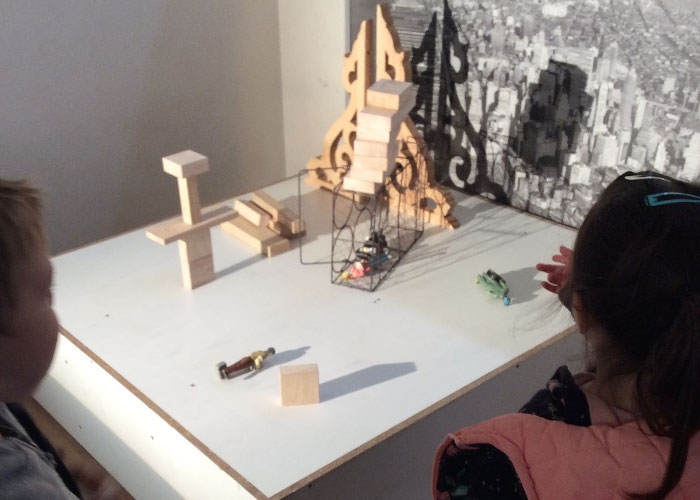 According to Cassie, “This space has the most intriguing investigation about circles. What was initially established as a light and shadow meets loose parts construction atelier revealed some fascinating thinking about community.”

She goes on to say, “The children kept visiting this ‘town planning play’ where we witnessed them building towers, roads and trains, and exploring how that interacted with the light and projection of the cityscape. When we sat as educators and analysed the evolution of their creations we found something truly fascinating – they were all circular in nature! It wasn’t until I went over to Reggio that I discovered that this is not a new thought, in fact many forms of traditional architecture/ town planning particularly in Europe is circular.”

Educators have been modifying the materials and drawing on these explorations, and many children are still referencing the circle. Cassie ponders, “So what does the circle have to do with the children’s thinking and formation of community? Stay tuned!”

Through ’s project, How a Learning Community is Formed, educators are pushing their own thinking and practice alongside the children. Children are exploring many concepts, learning a range of skills from science to social to language and are developing their own relationships with their community. We are looking forward to seeing how these projects progress and evolve over the coming months.

To learn more about Tree House Elsternwick and to see the projects for yourself, book in for a tour via our online form here.