Over recent months, the children at Export Park Childcare Centre in Adelaide have been heading out on regular excursions into the local community. From the theatre to the local parklands, everyone has loved getting out and about. Jumping on a bus one Friday, we made our way to Warriparinga Wetlands – a very special meeting place for the Kaurna People.

The Warriparinga Wetlands is the sacred place of the Glossy Ibis, the Trabrookie. When the Living Kaurna Cultural Centre building was built, the roof was formed like the out-stretched wings of the Trabrookie and was quite a sight to see as we approached.

Upon arrival, the children met Kaurna elder, Tamaroo, who was our guide for the day and shared many special stories with us. He first took us to the Trabrookie Dreamtime area where they Kaurna people had put large tree trunks in the ground (the trunks were given to Tamaroo when they were cut down to make space for a nearby road). While running around and counting how many shields were on the trunks, we also discovered that one of the trunks was painted in yellow ochre. Tamaroo explained to the children that they use ochre to paint special marks on their bodies in ceremonies and also use it to paint it on the trees where they remove the bark to stop white ants getting in.

Continuing walking, the children were also shown the kinds of foods the Kaurna people eat including wild apricots and kangaroo apples plus a ruby red saltbush which had lots of tiny red berries and were sweet like candy. There was also an interesting looking leaf with tiny white dots on it that is apparently very sugary – turns out it was poo from an insect that sucks sap from the tree! By exploring and tasting bush tucker children could get an understanding of how the Kaurna people lived off the land.

Tamaroo showed us a tree where he carved shields from the bark of the trees. He told us how trees provide just about everything the Kaurna need – shelter, food (animals and honey), and clothing (animal skin). From there, we were taken to a meeting place where the Kaurna people meet when there is a full moon and invited the children to put their handprint in the sand as a sign of respect. We also discovered very special places to the Kaurna people and the children heard about how the Indigenous people lived in this area.

After a delicious picnic lunch, we had music time with a clap stick and drums made of possum skin and were then shown a parndoo which looked just like a football. And that’s what it was… For thousands of years before European settlement, Kaurna were kicking a football – this fact amazed the children!

“This was an amazing experience for the children to be involved in and we received lots of great feedback from the families.” 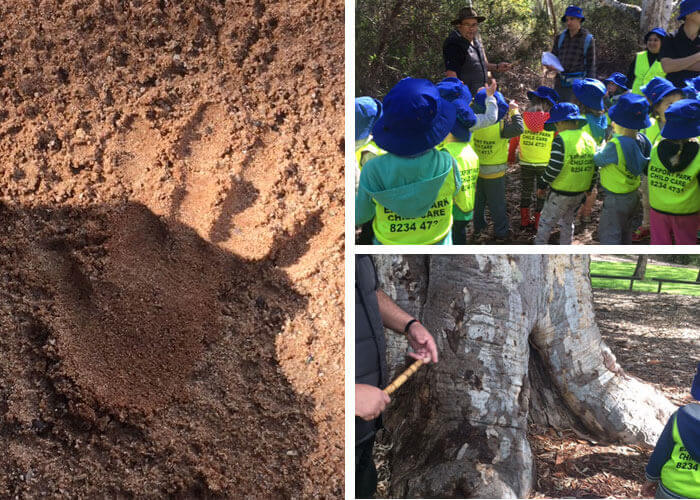 This experience was a fantastic opportunity for the children at Export Park Childcare Centre to develop a sense of belonging to the local community and to build a connection and respect to the local Indigenous people. By seeing how the Kaurna people live in the Warriparinga Wetlands, they were able to develop their sense of social responsibility and respect for the environment.

Excursions are a popular and valuable part of the program at Export Park and we are looking forward to hearing about where the children go next!

To read more about this early learning centre in Adelaide or to book yourself in for a tour, head here. We look forward to seeing you at Export Park!

#Excursions, #Adelaide, #Export Park, #Out and About, #Indigenous
SIGN UP TO OUR NEWSLETTER
mail_outline