Promoting greater understanding of Aboriginal and Torres Strait Islander ways and being is an important part of the curriculum at Guardian. At Guardian Allara Street this has been made a central focus with the introduction of an Indigenous Program.

The program involves regular visits from Duncan Smith and Wiradjuri Echoes where they share Aboriginal culture with the children through stories, food, music, dancing and art.

We chat to Centre Manager Julie Webb to discover more about the Indigenous Program at Guardian Allara Street.

Why did you decide to start an Indigenous Program?

We identified throughout Guardian Allara Street that no culture of any family or staff member was being represented. I had personally worked with Duncan Smith through past employment and knowing that the Early Learning Years Framework promotes a greater understanding of Aboriginal and Torres Strait Islander ways of knowing and being, it was a great opportunity for children to learn about this rich culture.

I felt that the knowledge and experience Duncan would impart would be a great way for families to explore and learn about culture and have the opportunity to ask questions specifically about Indigenous Culture.

For the educators it was to extend their knowledge and learn about the importance of culture in families. I wanted to bring down the barrier of “we can’t teach that because we are not from that culture” and start discussions about stereotype, what it means to belong and how we can expand on culture within the centre. 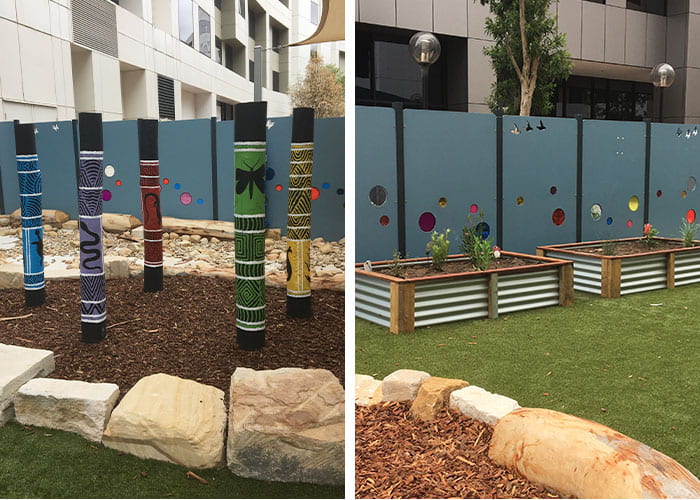 How long have you been running this program for?

The program began in July 2016 with fortnightly visits. Since February 2017 we have invited Duncan to come back on a monthly basis.

What have you got planned this year?

We have started a new bush tucker garden with the children and are currently learning about the totem animals of the mobs which met on Ngunnawal land.

On 14th March we will be holding an opening for the yard which will include Smoking Ceremony that will be completed by Duncan and the Wiradjuri Echoes and hopefully Ngunnawal Elder, Aunty Agnes (depending on her health), will do a Welcome to Country.

And finally we are holding a Culture awareness night for all Guardian educators in ACT.

Are there any particular activities the children do with Duncan Smith and Wiradjuri Echoes?

Throughout Duncan’s visits we dance, we sing and we listen to stories. Often Duncan will draw a picture for us when he is telling the story with some of the children selecting to colour it in.

Duncan also allows opportunity for children to explore musical instruments which were commonly used. The children often ask Duncan if they could “do the snake again” which is a dance of the serpent snake. The digeridoo makes the beat and all children hold onto each other in a line. They weave in and out of any items they can in the outdoor environment and eventually end up in a close circle which is similar to how the serpent snake moves when catching prey.

Are there any memorable comments the children have made?

The children thoroughly enjoy when Duncan and his mob Wiradjuri Echoes arrive at the centre. There are many hugs and children are always asking him to stay longer with every visit.   Just recently we were playing some relaxation music in the older rooms as some children were resting. The children heard a didgeridoo and thought Duncan was at the centre which caused them to look for him for about half an hour. After they realised he wasn’t at the centre, the educator took the time to explain about the music that was being played.

I personally think the most memorable moment is standing and observing the engagement educators and children have when Duncan attends the centre. The whole centre comes together as one – we become a mob – and it’s pretty magical. 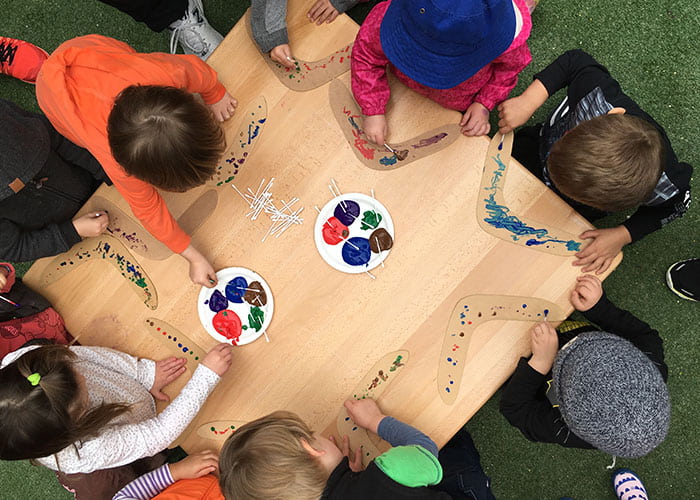 This was the first time children learnt about dot painting (pictured above). Duncan made small boomerangs for them and every child who attended that day took their artwork home. After this event many children extended their own learning by creating their own dot paintings or creating their version of dot painting, for example, placing small torn pieces of paper on a larger piece and identify the smaller pieces were the dots. We often heard the children state, “I’m Duncan” or “these are my dots” during this learning.

What’s been the feedback from parents?

The feedback has always been incredibly positive. Late last year we had a morning tea for parents to come and experience our Indigenous Program for themselves. We had about 10 families participate in this and the majority want Duncan to visit the centre on an ongoing basis.

I have some parents who have made comments on conversations they are having with the children when their child has identified something that links to Duncan. One such example was when a fire truck with traditional dot painting on it was sighted by a child while out. The child went on and stated “that’s Duncan”… The parents did say it took them a minute to understand what the child meant!

Finally, Storypoles have been a huge success with family and visitors – photographs have been taken by some of the preschool families so they can show and talk about their child’s government preschool indigenous culture program.

This month we will be starting a new cultural exploration journey where we’ll learn about the heritage of family members and explore different cultures. Educator Nasmeen Ahmed will be heading this up and we’re looking forward to understanding more about the wide variety of cultures in our centre. Watch this space!

Centrally located in the city, this childcare centre in Canberra provides long day care and rich experiences in a nurturing and safe environment. With a spacious outdoor area, nutritious meals and natural resources, children are supported, engaged and given room to grow.

To experience Guardian Allara Street for yourself, book a tour here.